flipping through our family album, years and years back : )

Welcome and the eldest member of the family, granma

The road from Poprad to Berlin took us through Poland’s countryside. We saw nice little villages and towns with pointy roofed houses. At the same time, we realised what a vast country Poland is. It was only late in the night that we finally arrived at our next destination: Berlin.

We made ourselves comfortable in the holiday apartment that my uncle booked for us, located in Frohnau where he and my grandma live.

The day after, grandma prepared the typical breakfast for us. I always used to get it at my grandparents’ place since early childhood. The breakfast comes with “Brötchen” (bread bun), boiled eggs, jam, cheese, and a hot drink. Sitting around the table, we talked about memories and politics, grandma’s favourite topics.

Back in the 70s, my grandparents visited Oslo a couple of times. Grandma remembered how modern and diverse the city was at that time already. After lunch, we went for a walk on the former border strip of the Berlin Wall. She explained that there wasn’t a wall in this area. All there was, was a fence where the soldiers were patrolling. With her 85 years, grandma experienced the end of WW2 as well as the cold war. The latter entailing the divide of Berlin into West- and East-Berlin. Her stories and the pictures she is drawing are a reminder of how grateful we all can be to live in peace now in Europe. 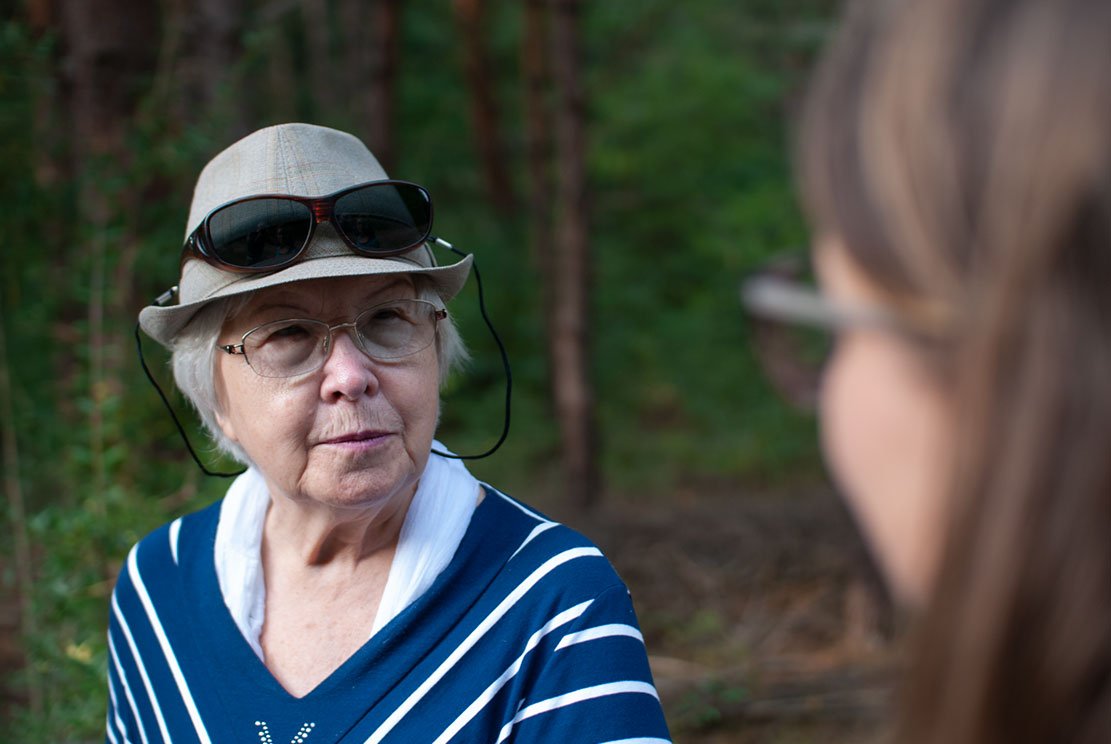 Grandma, walking in the woods where the Berlin wall stood.

The other stories and their effects

Simultaneously, we need to be aware of how fragile the peace is and how crucial it is to maintain it. Indeed, fake news is a real threat to it. This was a topic we were discussing for a while. We concluded that the spread of false information aims to destabilise and confuse us. It is when we don’t know anymore what to believe, feeling puzzled. Then we tend to follow so-called ‘strong leadership’ in some cases comparable to dictatorship. Disoriented, not being able to decide ourselves anymore, voluntarily giving power to them. Which is then used to enrich themselves and like minded people, instead of to enrich the lives of the people and environment we all live in.

Some political parties and other organisations are using this tactic to gain people’s support by playing with their fears and prejudices too. So to mitigate it, we need to become more careful when we spread information. We need to question its content and check the reliability of the source. Not impulsively share the wild fire in a dry forest of confused people. Governments and organisations can help to tackle this issue. But we as citizens, can help a great deal to weaken the spread of misinformation and lies, therefore dangerous manipulation, ourselves.

Participation of the people in the overall story

This led us to the next topic. Discussing citizens’ participation in politics without participating only once in four years, if so. We asked ourselves how we can increase peoples’ involvement in politics without causing a fiasco such as Brexit, so the matters are going in direction working for the people, not for the few?

A good inspiration was Ireland that has introduced a Citizens’ Assembly in 2016. That was to consider several political questions such the Constitution of Ireland, abortion, fixed term parliaments, referendums, population ageing, and climate change.

Just to briefly explain how it was. Convention members of the assembly were 33 representatives chosen by political parties, and 66 randomly chosen citizens. Meeting over 15 months the assembly considered seven constitutional issues previously specified by the Oireachtas (legislature of Ireland) and two more of its own choosing. It made 18 recommendations for constitutional amendments and 20 for other changes to laws or Oireachtas standing orders.

That’s how randomly selected people coming from various backgrounds and professions became an important, influencing part of the law amendments and creation, working for the many, not the few. How great is that!

We would like to learn more about this topic as it could be a way to spark more initiative from each of us to contribute to change the world, eventually the society, for the better.

In Berlin also lives my adorable niece Cléa who we loved to see too. We met her with Jan, her father, his partner Jenny and Cléa’s grandma Christine in a café. Outside the rain was pouring but Cléa and I found funny games and drawings to entertain us while the others were chitty-chatty. It was very nice to spend some time with her and them.

Later on, we decided despite the rain to go for a walk to the Tempelhofer Feld, a former airport in the middle of Berlin. This location has turned into a huge leisure park. A place where humans and wildlife such birds are enjoying themselves in mutual respect, in the middle of the massive city. There’s a wide range of things to do from kite flying, inline skating, gardening, picnicking, and much more. This day the place was quite deserted, though. Only us, puddles to jump into and rain wetting us through. What a joy to be there together!

Drawing of grandma that we draw together with Cléa : )

We left Berlin after four beautiful days and drove further to Rendsburg, a small town of 30 000 inhabitants. My mother lives there with her lovely little dog Lilly. Mum and Jozef only met once in 2017. This was when Jozef came to Germany and we both flew to Sheffield to live together. My mother and him got to know each other through the only meeting, my stories and via the messages they’ve been writing to each other from time to time. Nevertheless, it was nice to see them interact face to face, knowing each other better.

We also spent time merged in memories of my childhood, diving even deeper when looking at the family albums and talking about all sorts of things. We asked one another what family meant to us. Jozef explained that he could easily expand his definition of family to friends, neighbours, foreign people as well as animals, plants, and other forms of life. As we all share the same space and resources. And indeed everything evolved from a peculiar life form at the beginning, bacteria : ) By the way, did you know that every single human on the planet shares a gene coming from one woman only, Mitochondrial Eve? Yes we indeed are all distant sisters and brothers.

On this thought mum was pondering for a while. She liked the idea very much, as she said that to expand family to your friends, neighbours was something she had never considered before. How nice it would be indeed if we could see each other as one big family (that we truly are) and treat one another accordingly, with respect, love, and care. 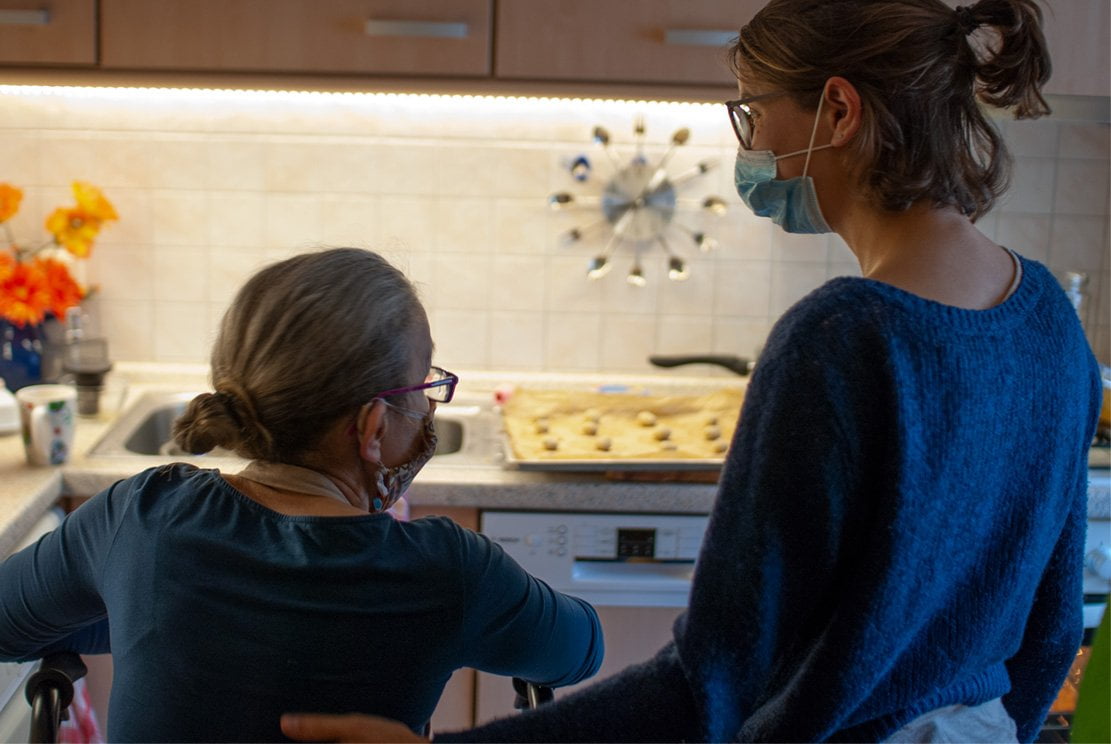 Mum. Those moments that stay with us.

Speaking of care, we also approached this topic. We talked about mum’s future care, less because of her age (she’s only 61) but more because of her poor health.

My mum was diagnosed with shingles recently. The virus damaged some of her nerves in the legs impeding her to walk as she used to. I admire her for her mindset and patience that gives her the confidence to see herself walking better soon. Nevertheless, it was good to listen to what she would wish for herself.

For me in our relationship it is important to keep a level of equality between us as two mature adult people. I wouldn’t like the power to be shifted from superior parent to inferior child, when she’ll age more, if you know what I mean.

The other thing was that we had been planning with mum to teach me how to crochet and knit for a long time. So I was pleased that the moment eventually arrived. Not online, but face to face. Sitting on the sofa, mum patiently explained to me the various crochet and knitting techniques. After some days, I found my head around it pretty well. The cold, dark winters can come. I’m ready for it! : ) 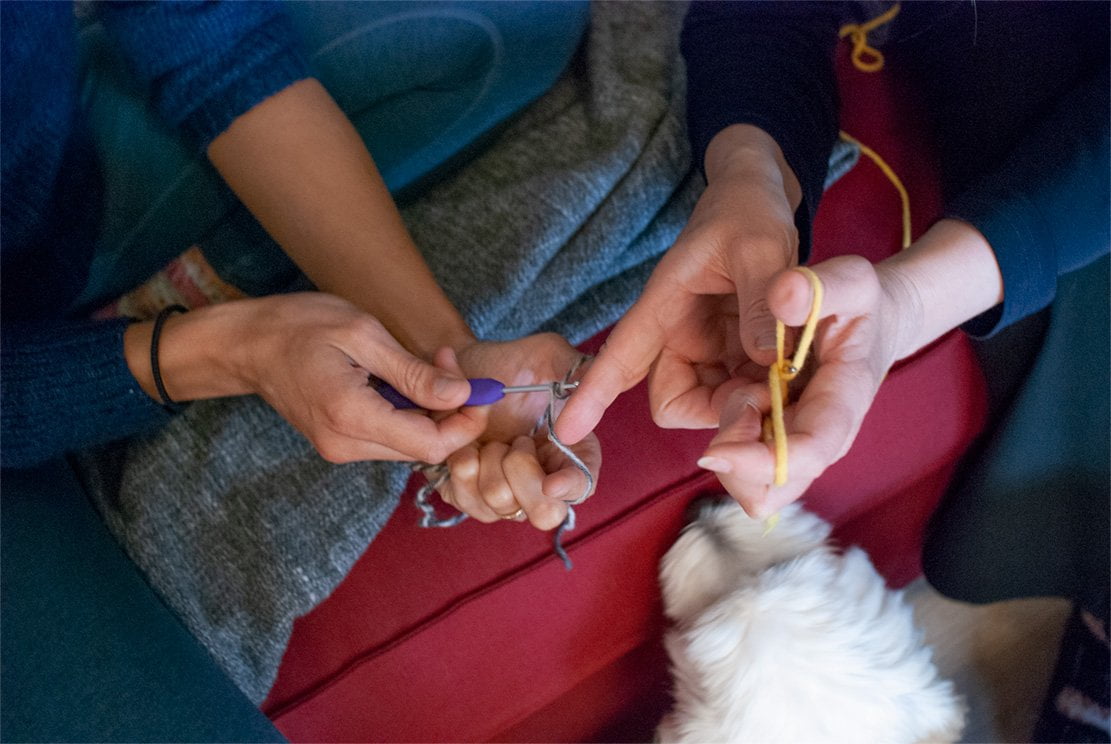 Mum teaching me how to crochet. And nosy Lily : )

We also had the chance to go through some of my material on nonviolent communication I taught about in Sheffield. I was happy to get to know mum more this way. Listening to her thoughts on how she perceives and deals with conflict. Most of us have a negative attitude towards conflict. Perhaps, because we would like harmony to be present in our lives often, and live peaceful relationships as opposed to arguments and break-ups.

So why not see conflict as a learning opportunity? Learn it so well that it won’t arise in the future if at all.

The last jointed experience and goodbye

After some days of sun, the rain came. But no reason to miss out on an afternoon at the seaside in Eckernförde (very north of Germany). For mum, it was a special moment as she hadn’t been out, except for the regular walks with Lilly, since March. Lilly also enjoyed herself very much. Digging in the sand, running around, and socialising with other dogs.

Three wonderful weeks in Germany passed by and we look back to them with a warm smile.

With winter tyres on which wasn’t straightforward as one would think, but let’s talk about it another time, we look forward very much to finally get to know Scandinavia.

Will get back to you from there.