8th Century AD The beginning of the Viking era

Perhaps the most famous period in Norwegian history, the Viking Age was a period of expansion not just for Norway, but the whole Nordic region.

Far from just barbaric, axe-wielding invaders, the Vikings created complex social institutions, oversaw the coming of Christianity to Scandinavia and left a major impact on European history through trade, colonization and far-flung exploration.

The first record of the Vikings was the late 8th-century raid on Lindisfarne, an island off the northeast coast of England. 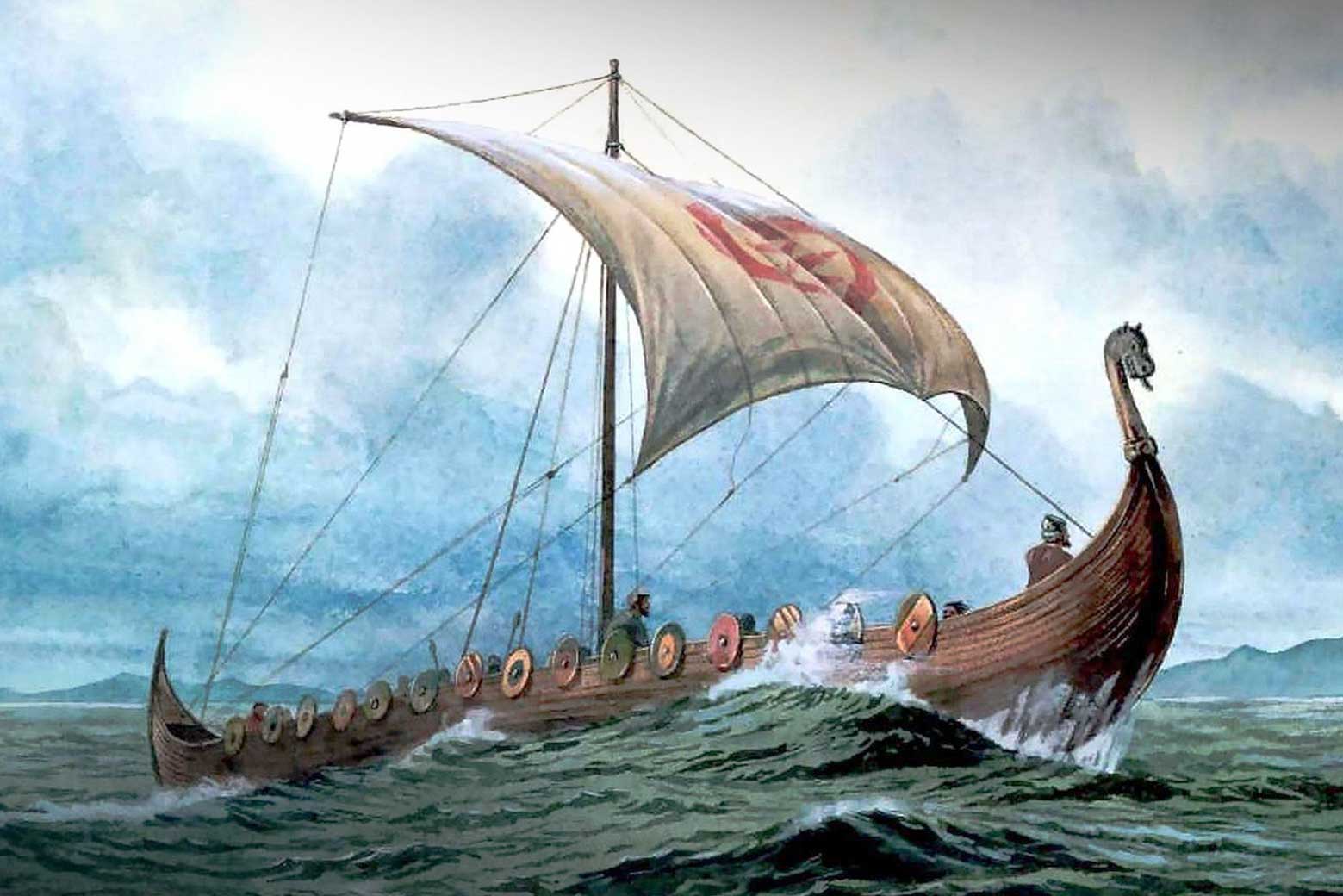 Early Vikings saw Christianity as a heretical threat to their own pagan beliefs. Christian monks and missionaries were active in Scandinavia throughout the Viking Age, but it took until the era of Olav Tryggvason (963-1000) for the tide to begin to change. Following Tryggvason’s death, it was Olav Haraldsson who began to pass church laws, destroyed pagan temples, build churches and appoint priests.

By 1030 Christianity was adopted as the main religion.

The 14th century is described as Norway’s Golden Age, with peace and increase in trade. Until in 1349, the Black Death spread to Norway and within a year killed a third of the population.

In 1380 Olaf Haakonsson inherited the thrones of both Norway and Denmark and created a union, the start of a long period of political alliances and wars between the Scandinavian countries.

1817 Norway as an independent nation
The economy suffered as Denmark–Norway backed France in the Napoleonic Wars and soon Sweden took an interest in Norway.

Following the Battle of Leipzig in 1813, Norway was ceded to the king of Sweden. The Crown Prince of Denmark-Norway and resident viceroy in Norway, Christian Frederik, however, began a Norwegian independence movement not happy with the cessation of Norway to Sweden.

He traveled to Trondheim to gain support for his person, and then assembled twenty-one prominent citizens in February 1814 to discuss his plans.

They rejected a new absolute monarchy and advised him instead to convoke a constituent assembly to draw up a liberal constitution and decide the form of government.

Representatives from the entire country were elected to meet. The 112 members of the Constituent Assembly gathered and, after six weeks of discussion, concluded the work on the Constitution of Norway on 17 May 1814. Power would be split between the king — a position to which Christian Frederik was appointed — and the Parliament of Norway.

Just weeks after the signing of the constitution, King Carl Johan of Sweden invaded Norway and due to economic troubles, Norway accepted to enter a personal union with Sweden on equal terms, while Sweden accepted the Norwegian Constitution and separate institutions in both states. 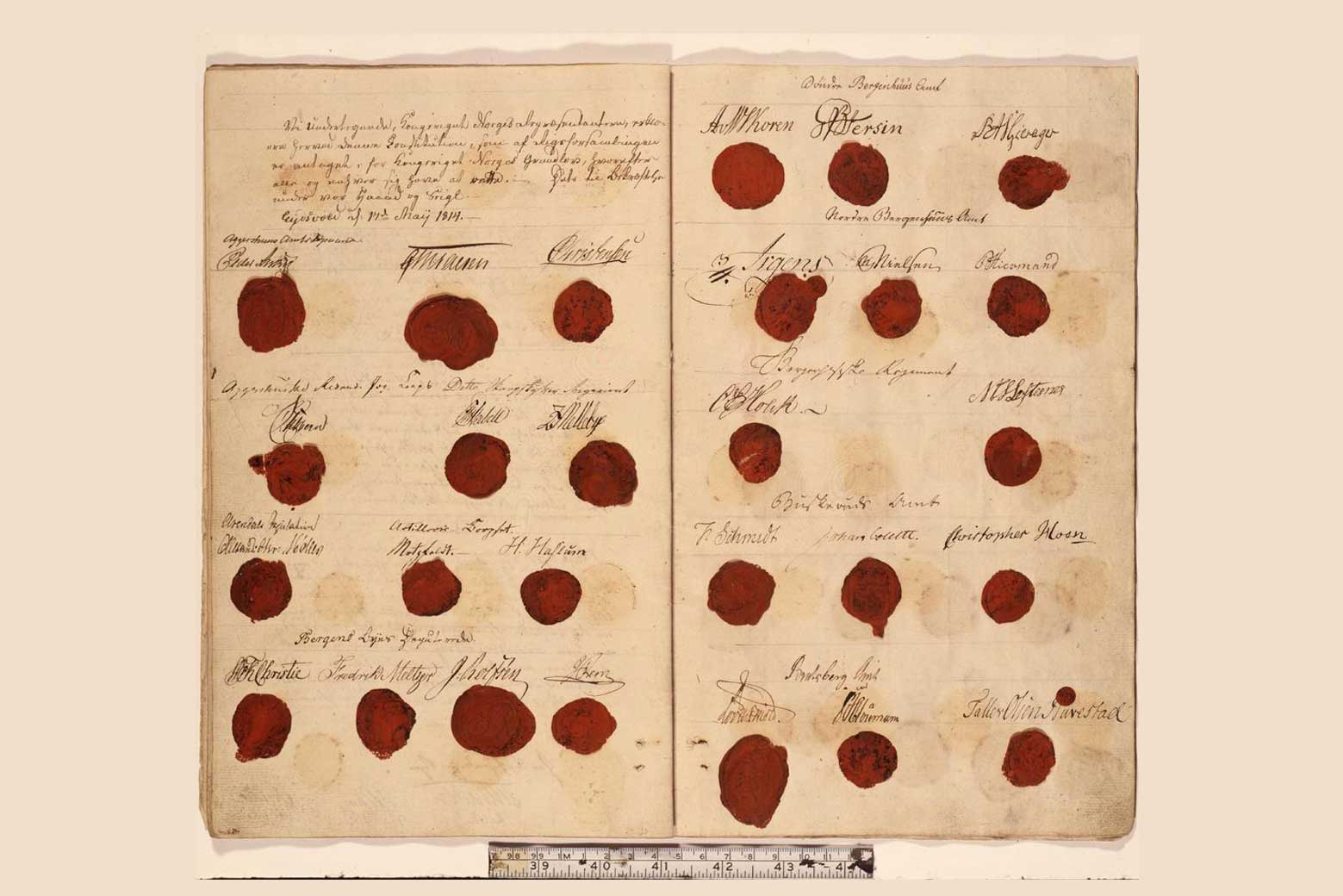 Signatures on the original Norway’s Constitution document from Eidsvoll signed 17 May 1814.

In early 1905, Christian Michelsen formed a coalition government in Norway consisting of liberals and conservatives, whose only stated objective was to establish a separate Norwegian corps of consuls. The law was passed by the Norwegian parliament. As expected and probably as planned, King Oscar II ( King of Sweden) refused to accept the laws, and the Michelsen government resigned.

When the king declared himself unable to form a cabinet under the present circumstances, a constitutional crisis broke out on 7 June 1905.

Later that day, the Storting voted unanimously to dissolve the union with Sweden, taking the line that Oscar had effectively abandoned his role as King of Norway by refusing to appoint a replacement government.

Following some months of tension and fear of war between the neighboring kingdoms – and a Norwegian referendum held on 13 August which overwhelmingly backed dissolution (only 184 people voted for an union) – negotiations between the two governments led to Sweden’s recognition of Norway as an independent constitutional monarchy on 26 October 1905.

In 1913, Norway became the second country in Europe after Finland to give women the vote.

On the photo are the board members of the Norwegian National Women’s Council (LSKF) in 1904. Karen Grude Koht, Fredrikke Marie Qvam, Gina Krog, Betzy Kjelsberg and Katti Anker Møller. The LSKF was founded as a protest to the suffrage reform of 1898, when male suffrage was achieved, while women were left out.

The year after, the members put forward a demand of women suffrage with 12 000 names for the parliament. In 1905, the organisation supported the dissolve of the union with Sweden. From 1906, it was a part of the International Council of Women 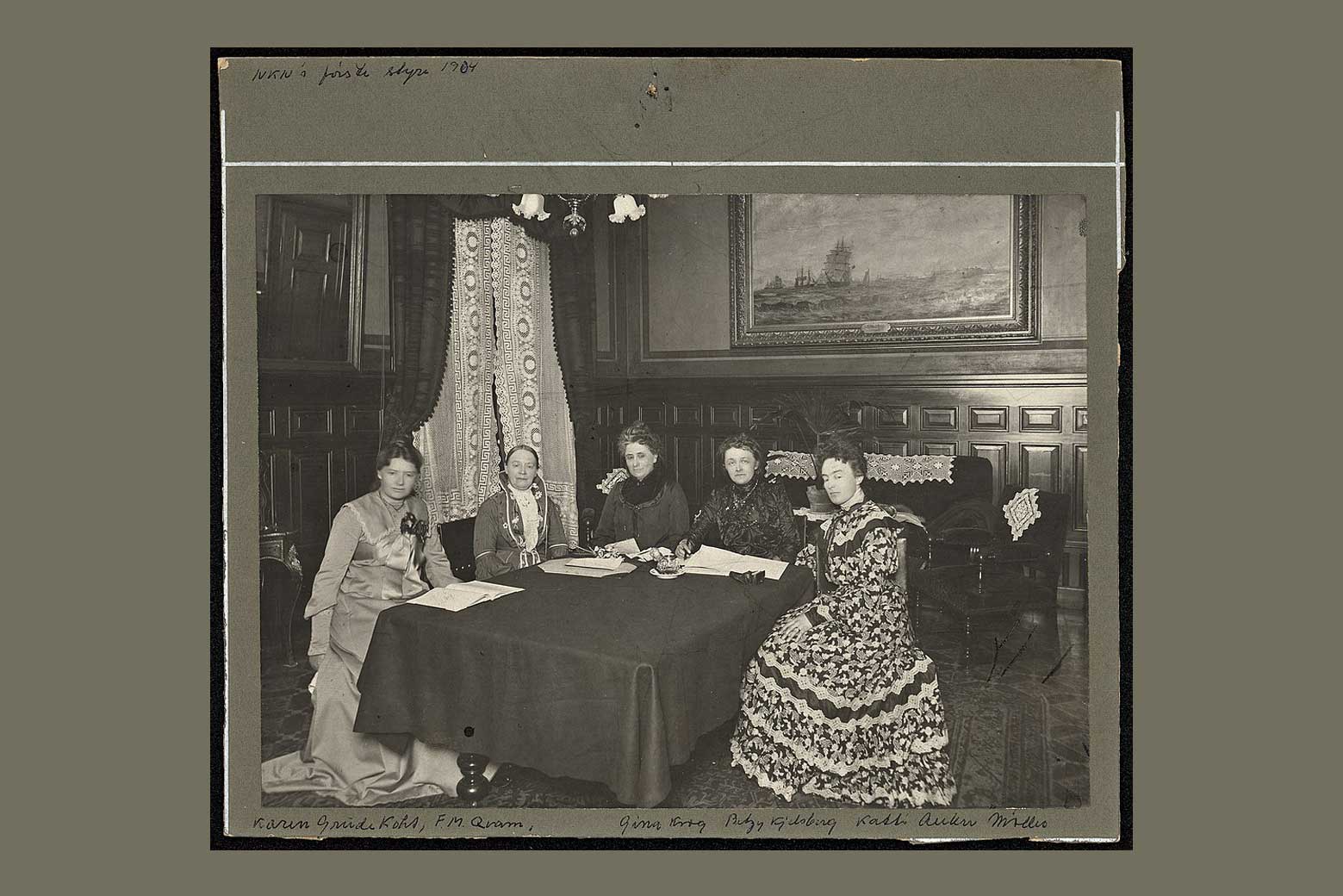 1940-1945 Although Norway adopted its policy of neutrality from 1905 in WWI and II, Forces of Nazi Germany occupied Norway from the beginning to the end of World War II.

In 1969, oil was discovered in the Ekofisk field, which would eventually become one of the largest oil fields in the world. The emerging industry not only created jobs in production, but a large number of supply and technology companies were established.

High petroleum taxes and dividends from state-run Statoil earned the government significant revenues – and continues to do so. 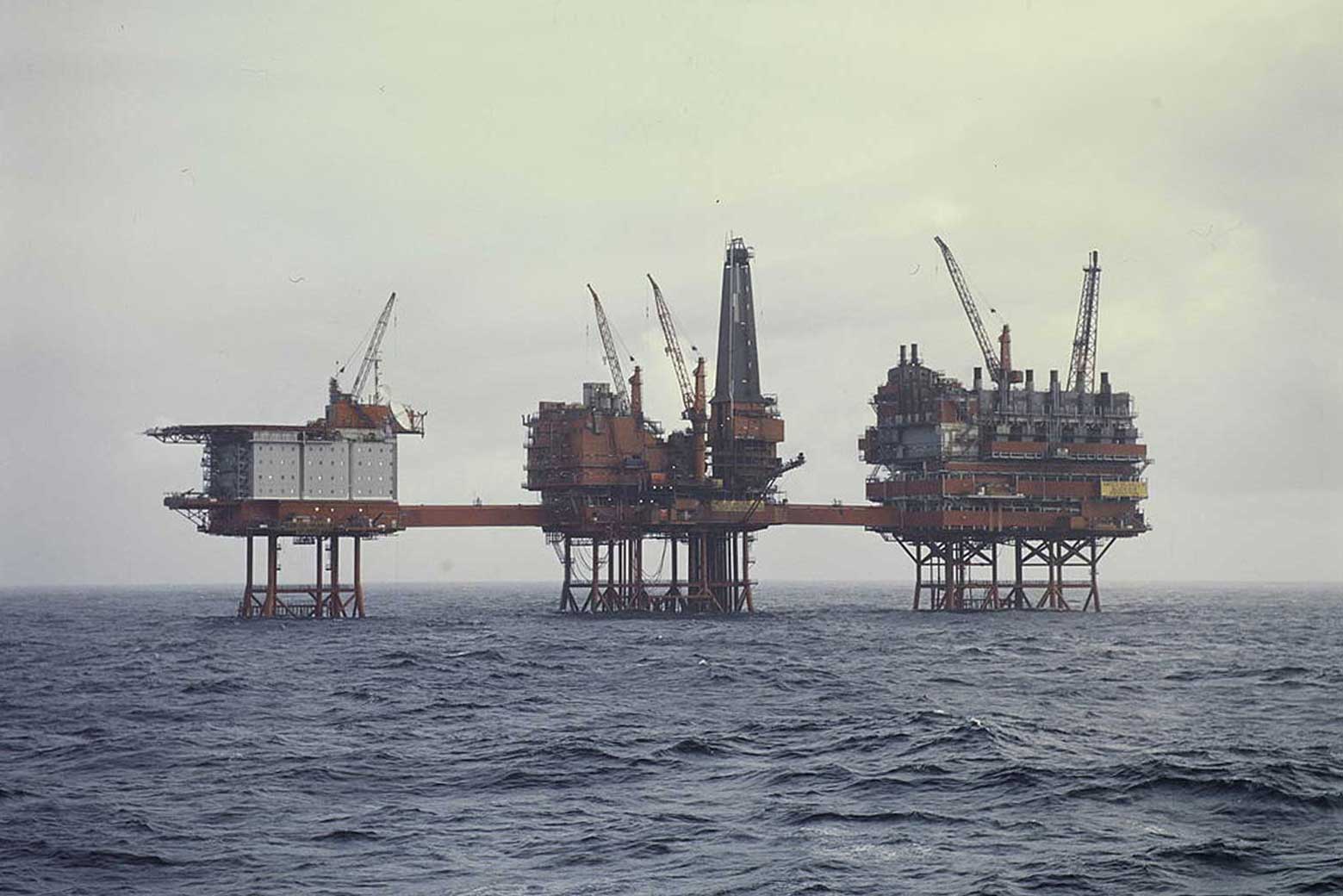 Norway is among one of the most equal countries in the world. 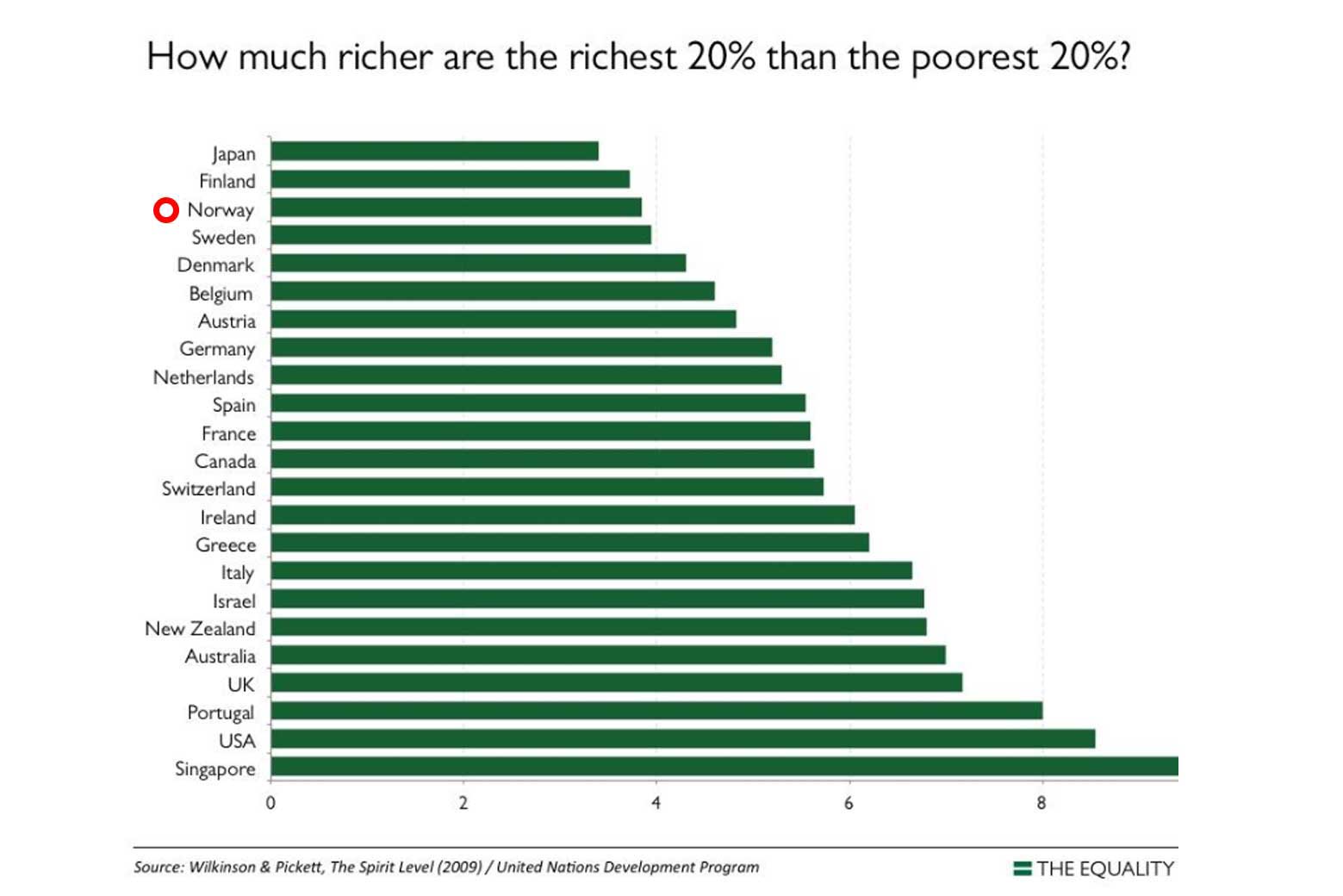 Income tax is split into a base rate and a step tax, to allow for progressive taxation. The base rate of income tax in Norway is 22%.

Corporate taxable profits (ordinary income) are taxed at a flat rate of 23%.

The following chart shows Norway’s public social spending and that the total expenditure on social protection benefits in Norway is high in comparison to other OECD countries. Norway spends nearly 25% of its revenues for social purposes. 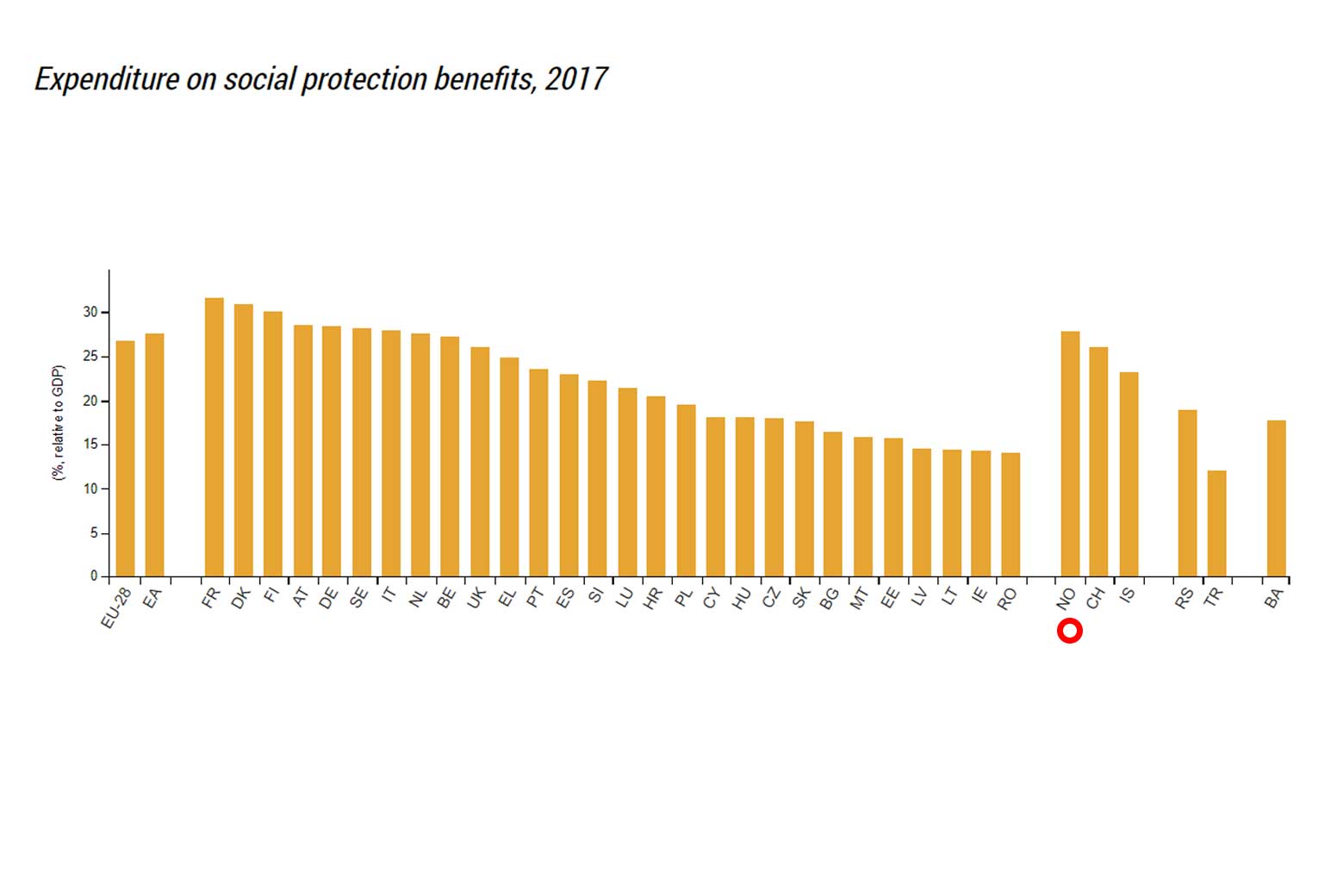 The chart clearly depicts that the emphasis remains on a homeownership model. Public housing is therefore being provided to the most vulnerable who feel the direct impacts of housing shortages and long waiting lists. 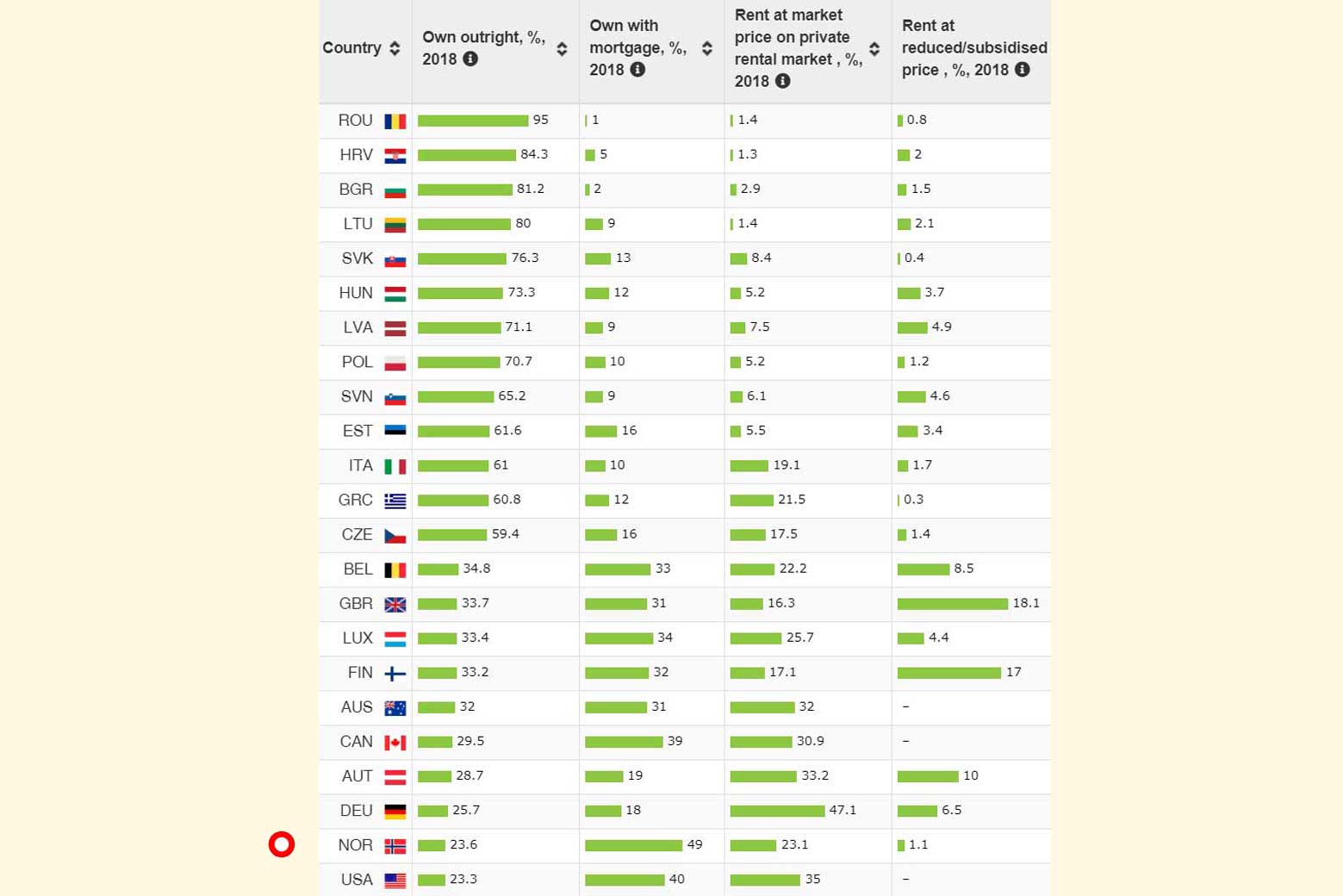 Chart showing percentage of owning properties and renting by citizens of various countries in Europe.

The majority of Norwegian universities and state university colleges are publicly funded and the Norwegian government considers access to higher education for all to be an important part of the Norwegian society. Thus, as a rule, Norwegian public institutions do not charge tuition fees. 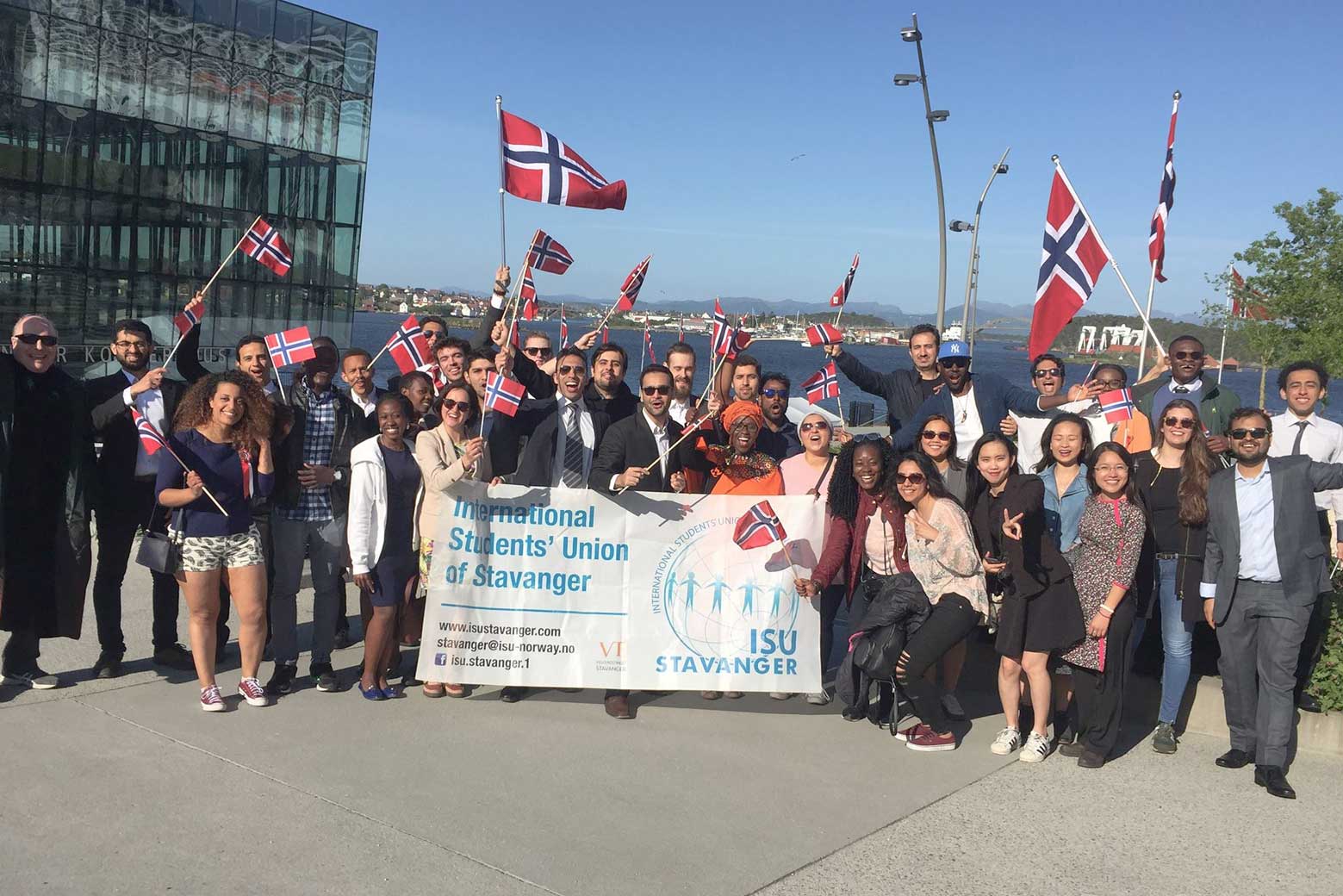 A group photo of international students in Norway, Stavanger. 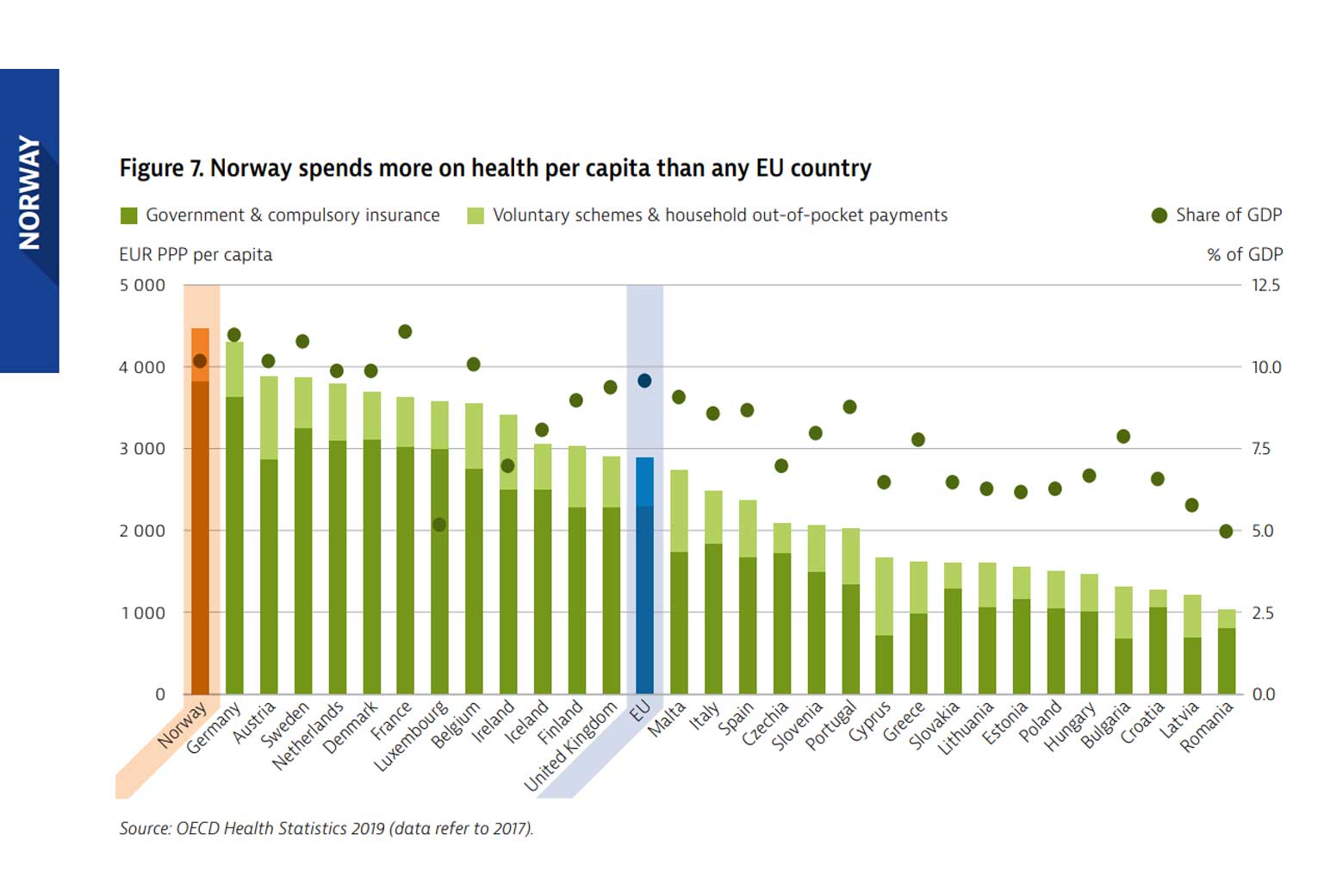 In terms of the quality of the education system, the average student scored 504.3 in reading literacy, maths and science in the OECD’s Programme for International Student Assessment (PISA), slightly higher than the OECD average of 486. 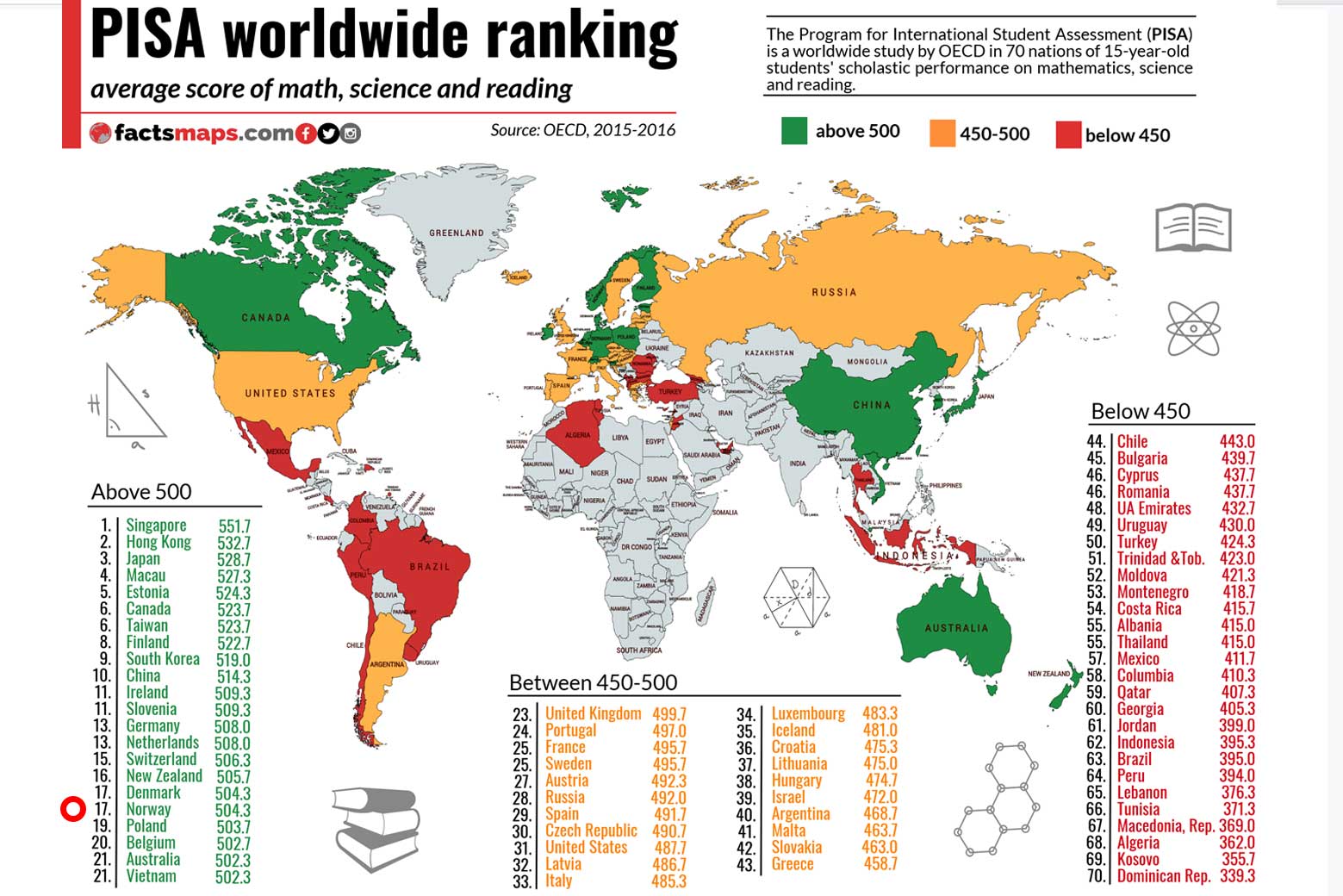 Despite having data for only 8 countries, the relationship between intergenerational social mobility and income inequality is very strong. The graph shows that countries with bigger income differences tend to have much lower social mobility. Norway is on the top of this graph which is also linked to the public expenditure on school education which is about 97.8%. This is likely to have a substantial impact on social differences in access to higher education. 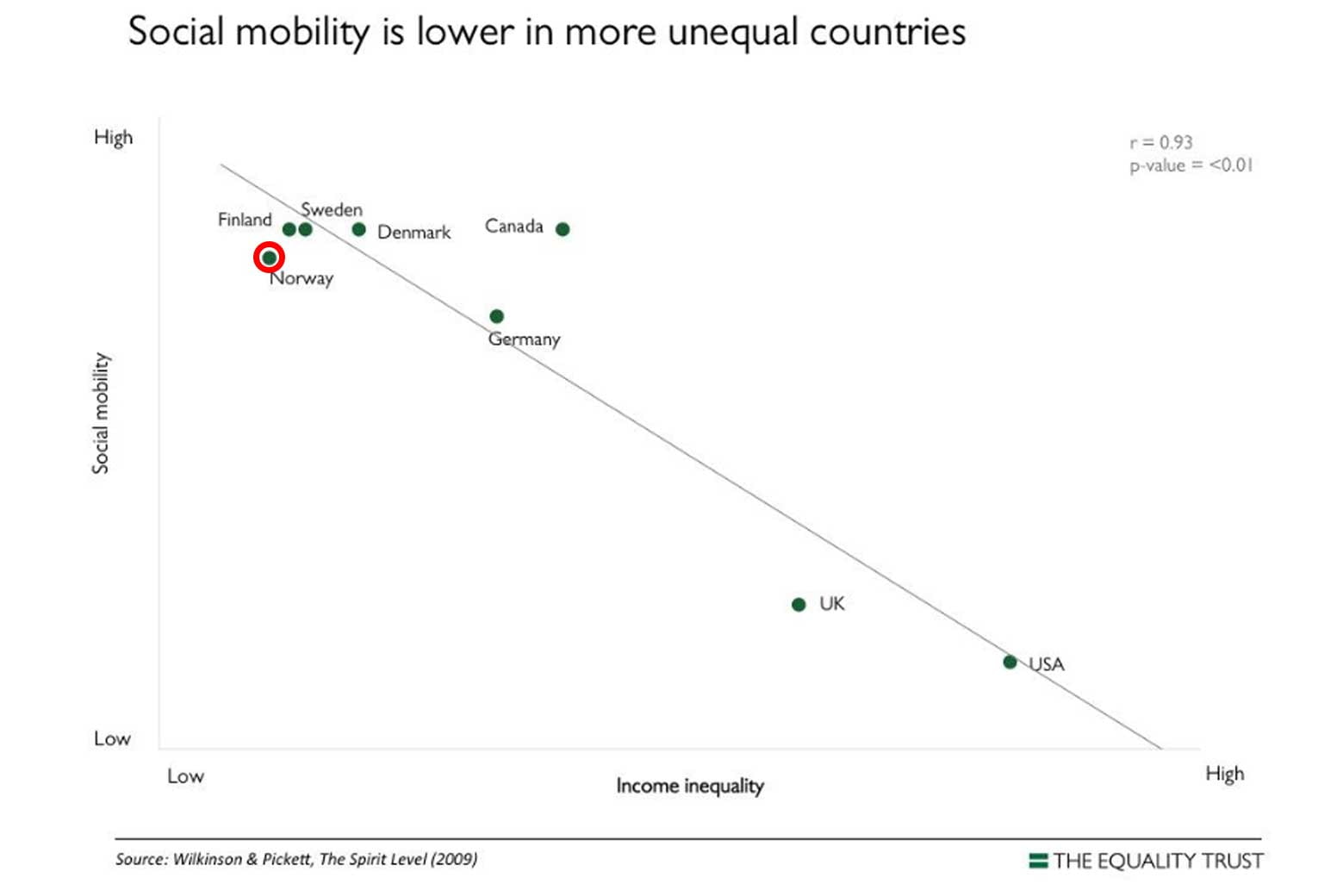 In Norway, about  64% of the population believe that other people can’t be trusted and  94% of people believe that they know someone they could rely on in time of need. 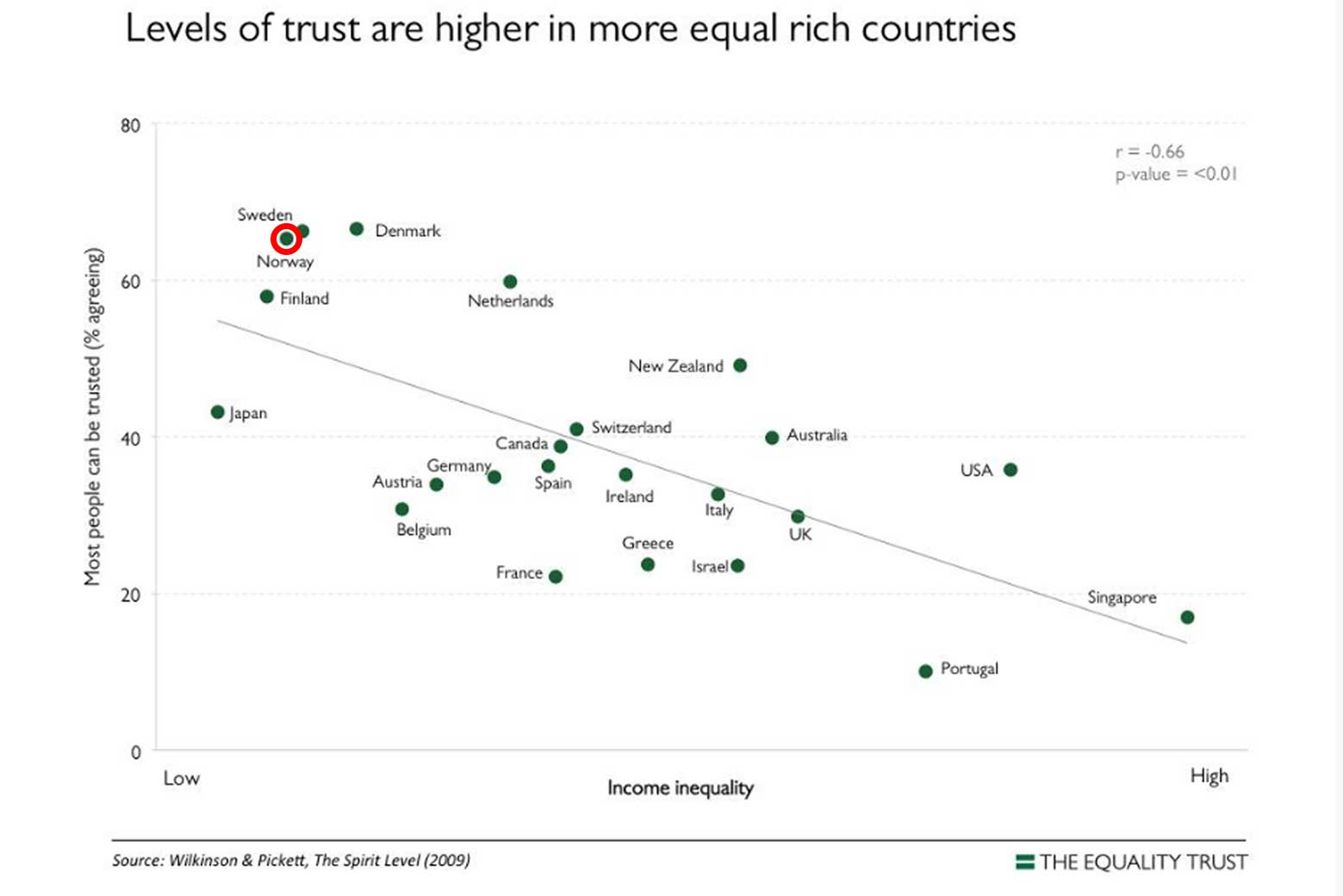 Norway is ranked among the world’s top ten countries in terms of the happiness of its population, according to an international survey (World Happiness Report 2018) 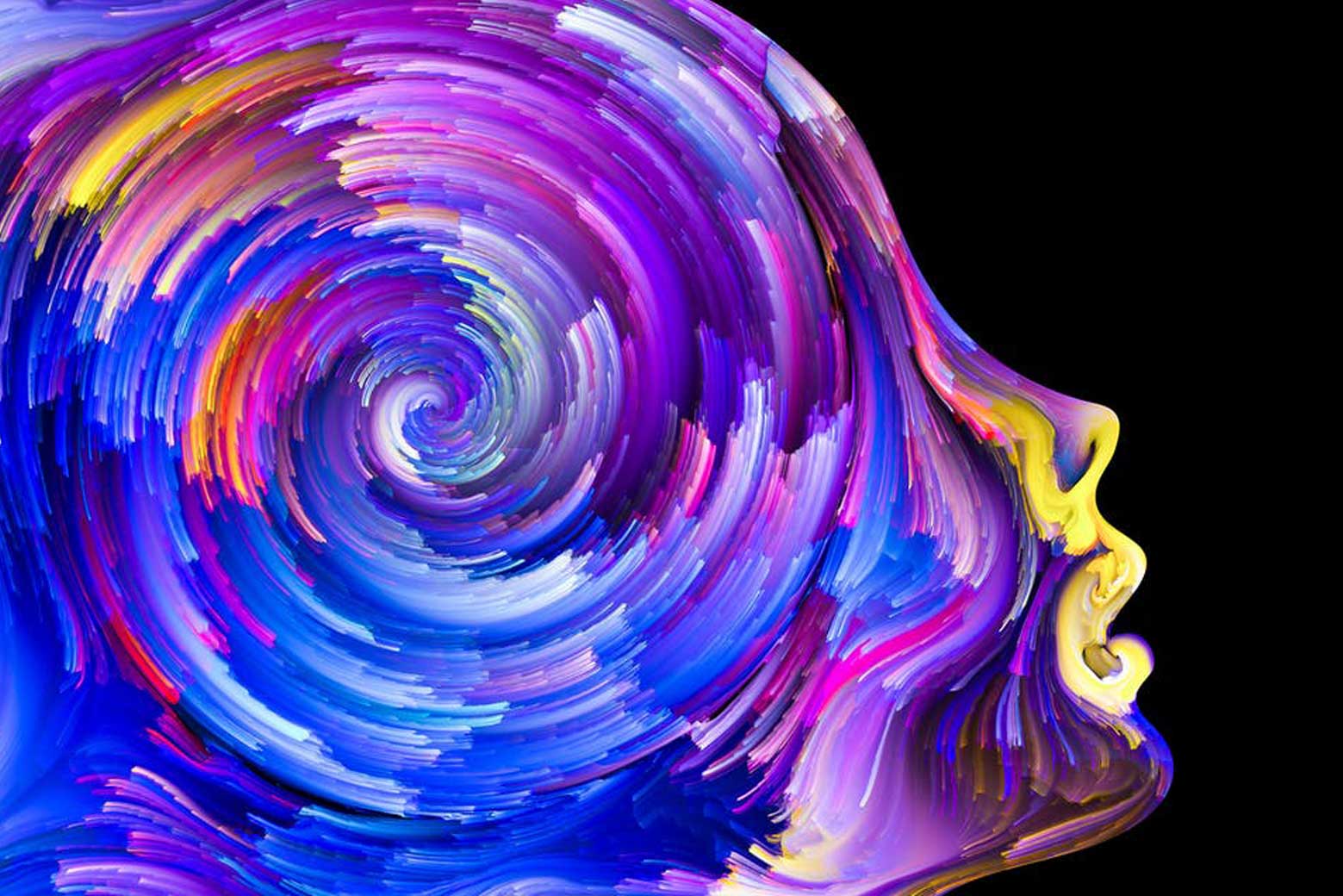 In 2015, the Norwegian government presented a new action plan addressing substance use and addictions that comprises and prioritises activities for prevention, early intervention, treatment and aftercare for individuals with substance abuse problems.

In Norway, the latest average drug-induced mortality rate among adults (aged 15-64 years) was 75 deaths per million in 2016. Considering developments between 2003 and 2016, and the gradual population growth during the observed period, the trend is considered stable or slightly decreasing in terms of rate per capita. 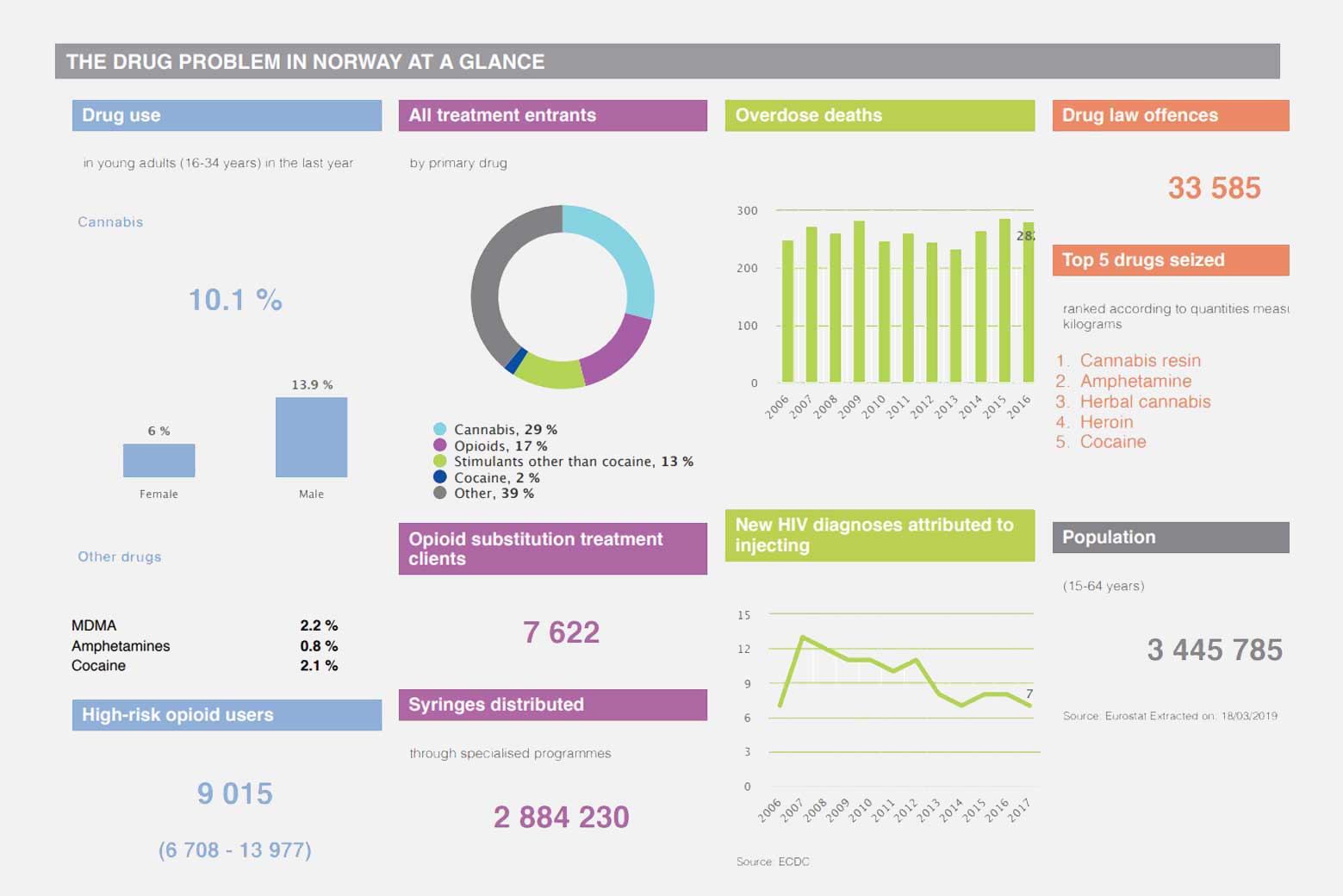 Chart of the drug problem in Norway at glance. 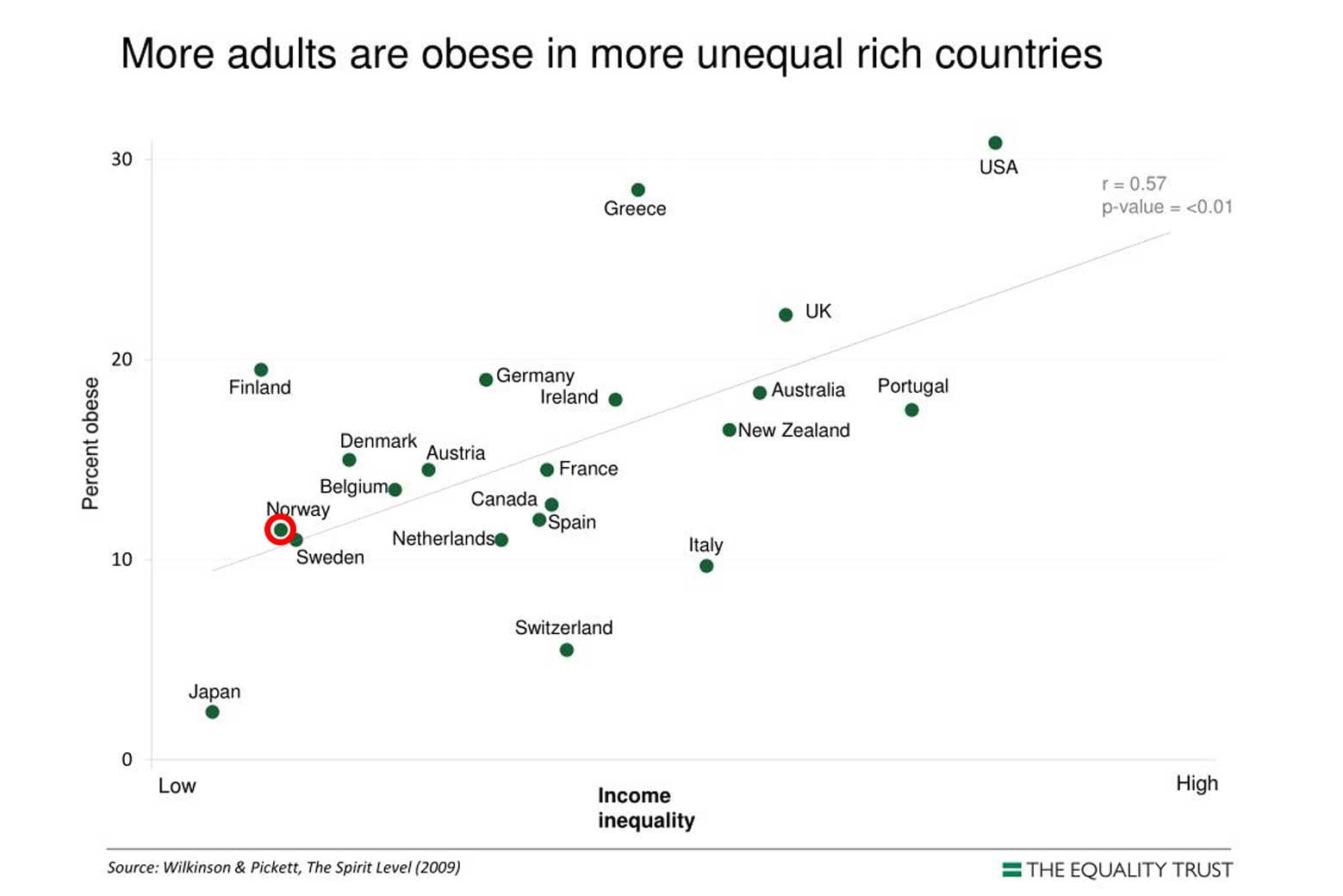 Norway is among the countries at the bottom of the charts when it comes to teenage birth where the teenage birth rate lays slightly higher than 10% (per 1000 women aged 15-19). The graph shows that teenage pregnancy is linked to income inequality. 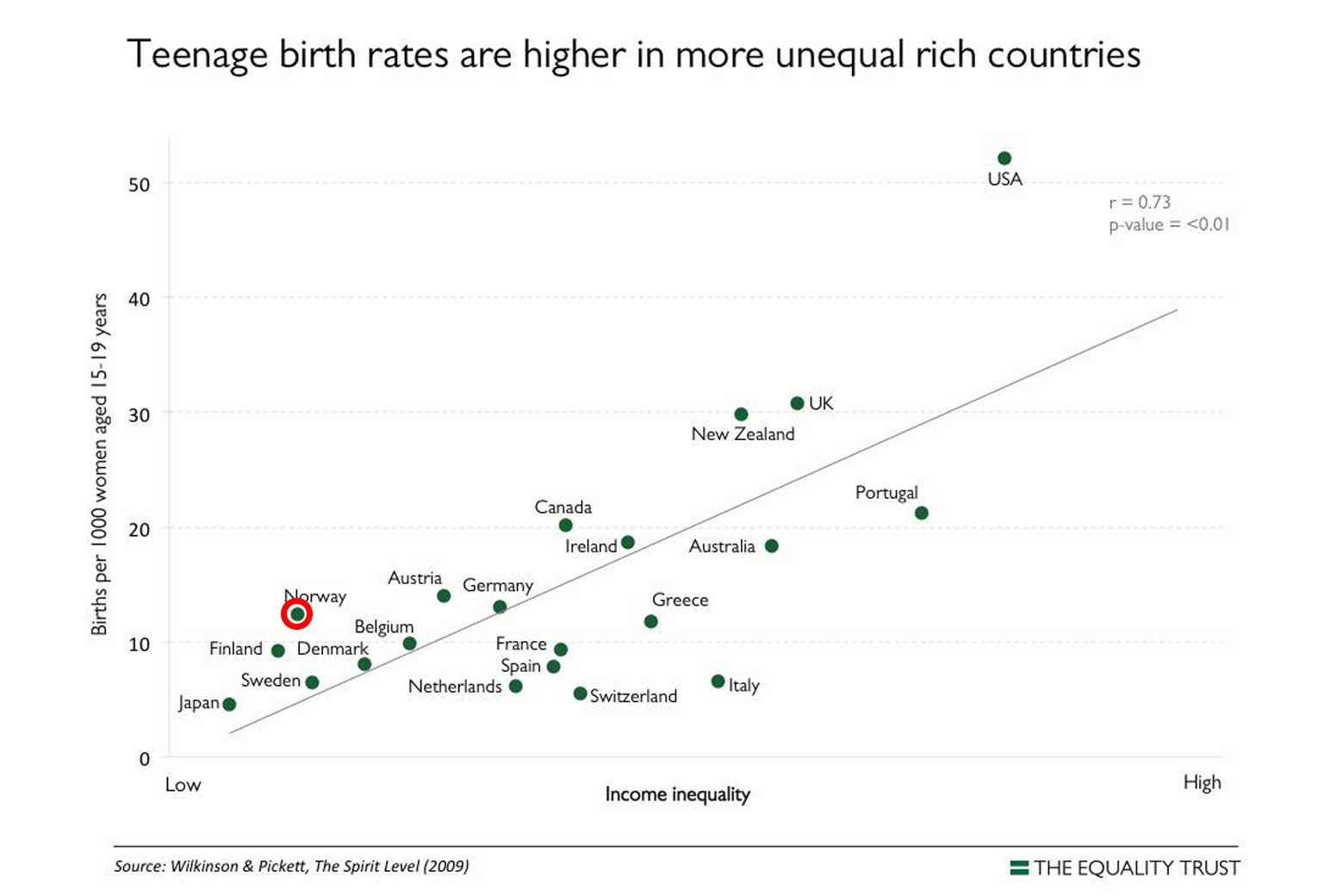 Life expectancy at birth for the whole population in Norway stands at almost 83 years, three years above the OECD average of 80 years. 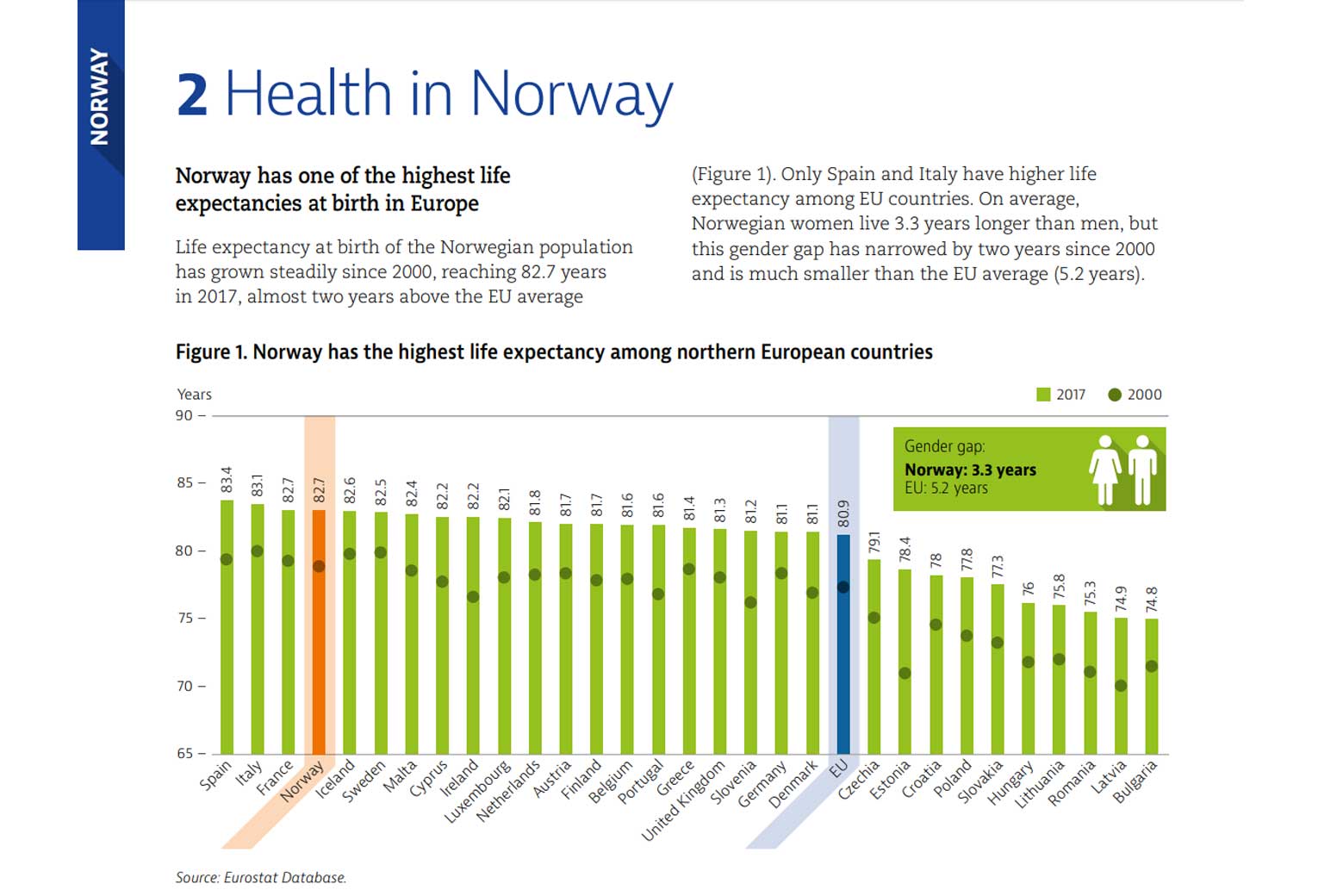 The graph shows the international homicide rates are related to income inequality. Norway’s homicide rate is below 10%. 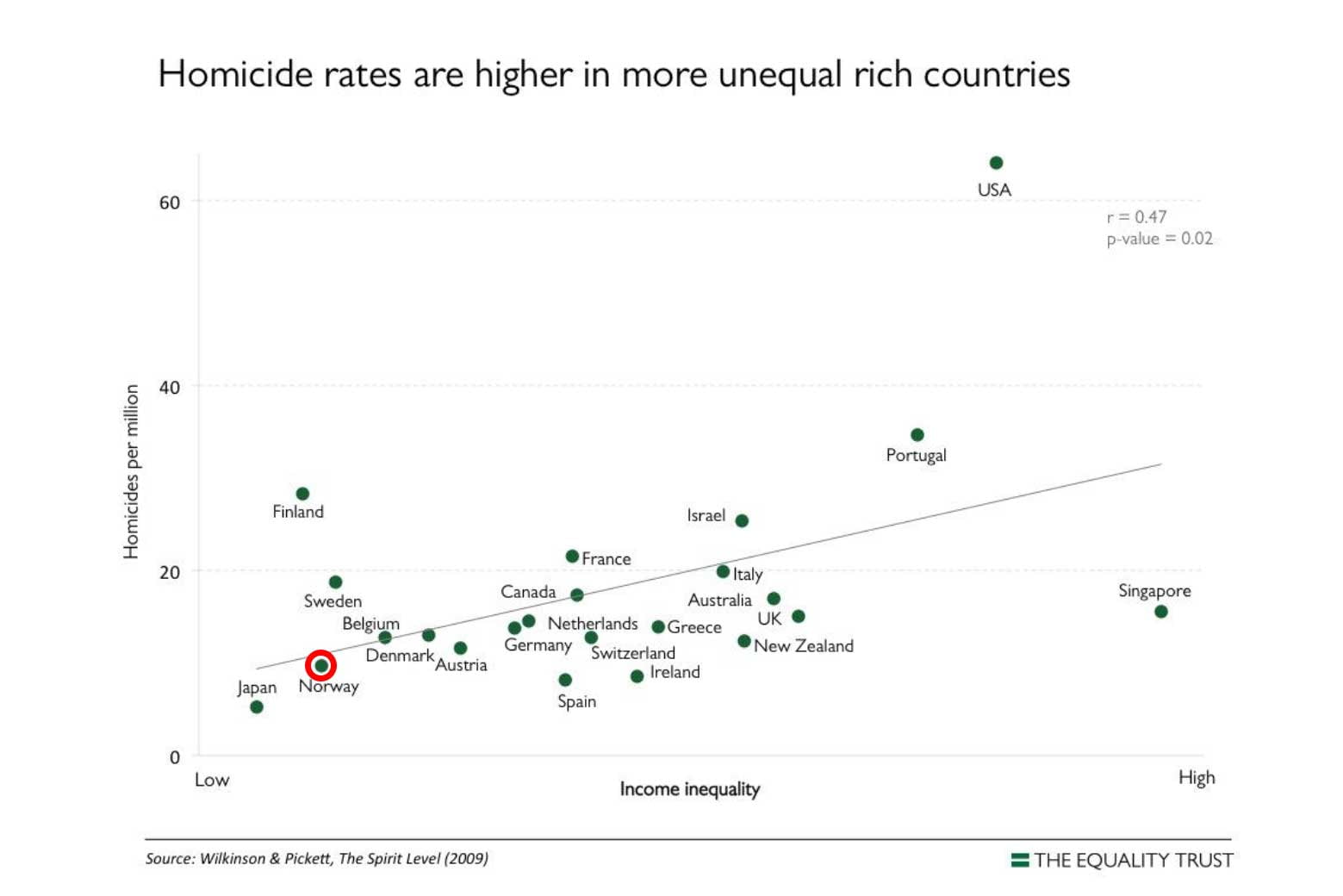 The graph shows that Norway is among the leading countries in relation to recycling, energy recovery and landfill restrictions. 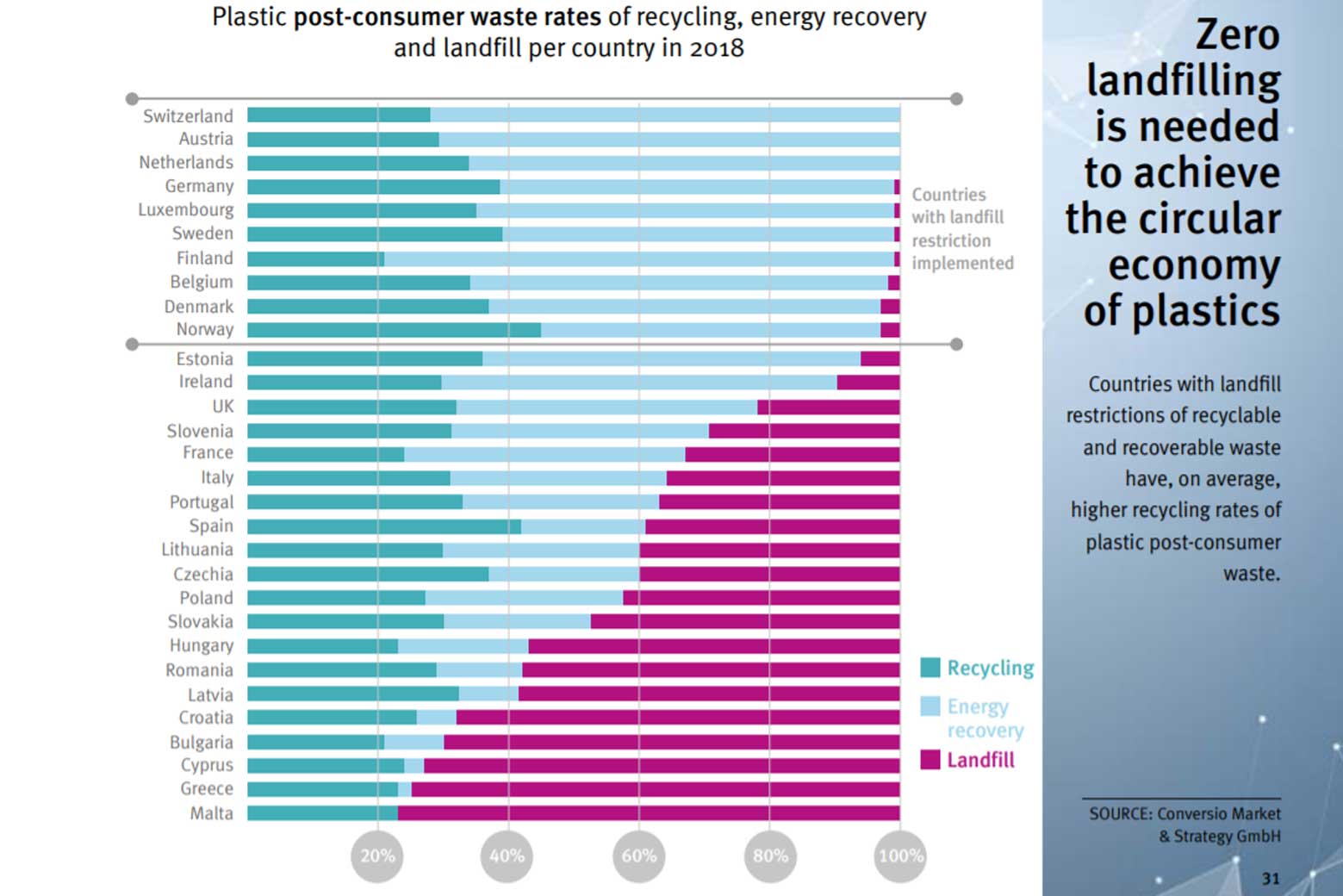 Recycling, energy recovery and landfill per country in 2018 chart.

The long-term World Health Organisation Air Quality Guidelines (for PM2.5 (Particulate matter (PM) is a term used to describe the mixture of solid particles and liquid droplets in the air) PM2.5 means the mass per cubic metre of air of particles with a size (diameter) generally less than 2.5 micrometres were exceeded at 69 % of the stations (958) located in all of the reporting countries, except Estonia, Finland and Norway. They did not report any concentration above.

In Norway 4% of all trips are made by bike. 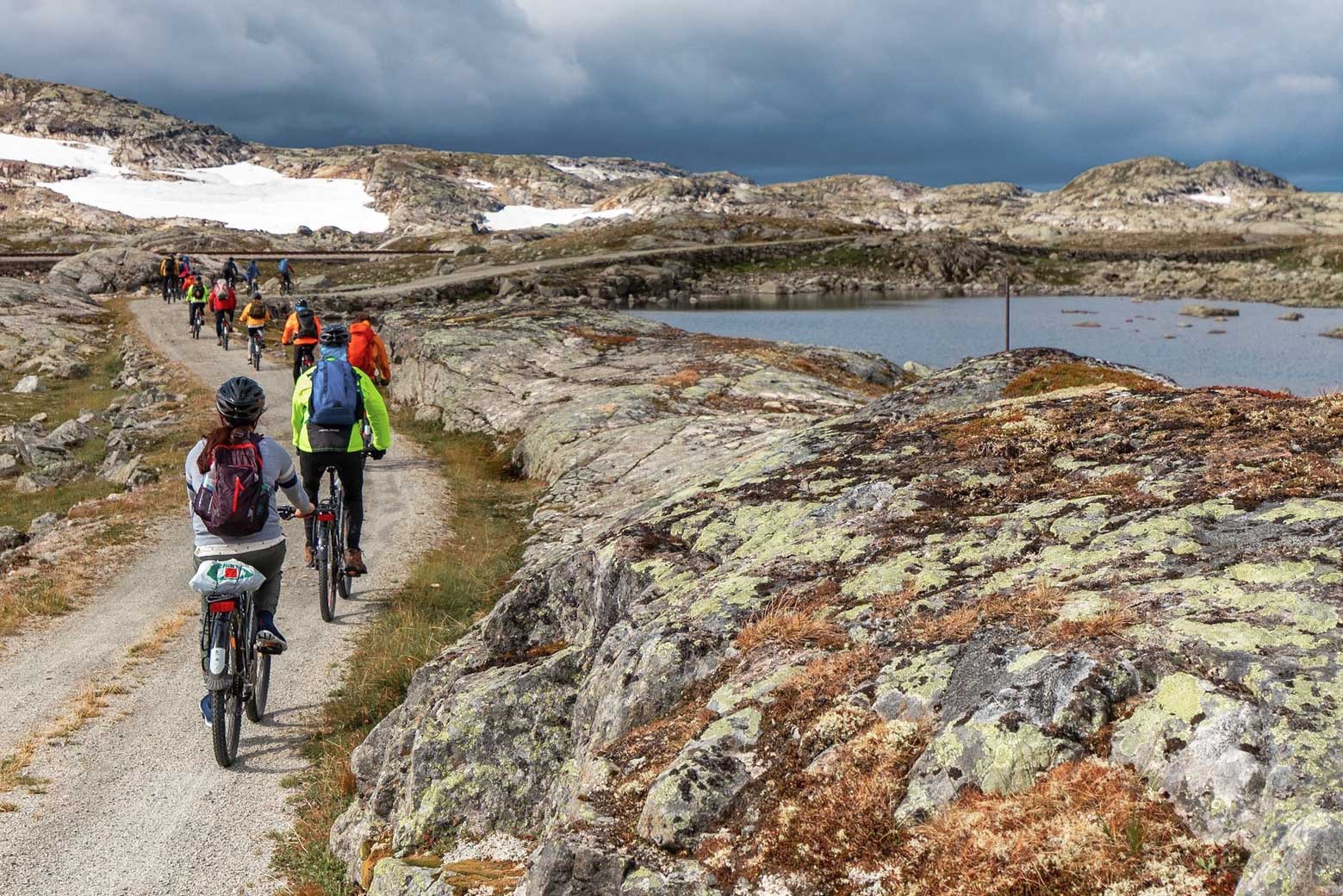 So far, Norway is the only country to do something towards this pledge that’s drastic enough to make a difference. They have become the first country in the world to ban deforestation. The Norwegian Parliament pledged that the government’s public procurement policy will be deforestation-free. By becoming the first country in the world to make such a large-scale move against deforestation, Norway is setting an example for other countries to consider similar policies. 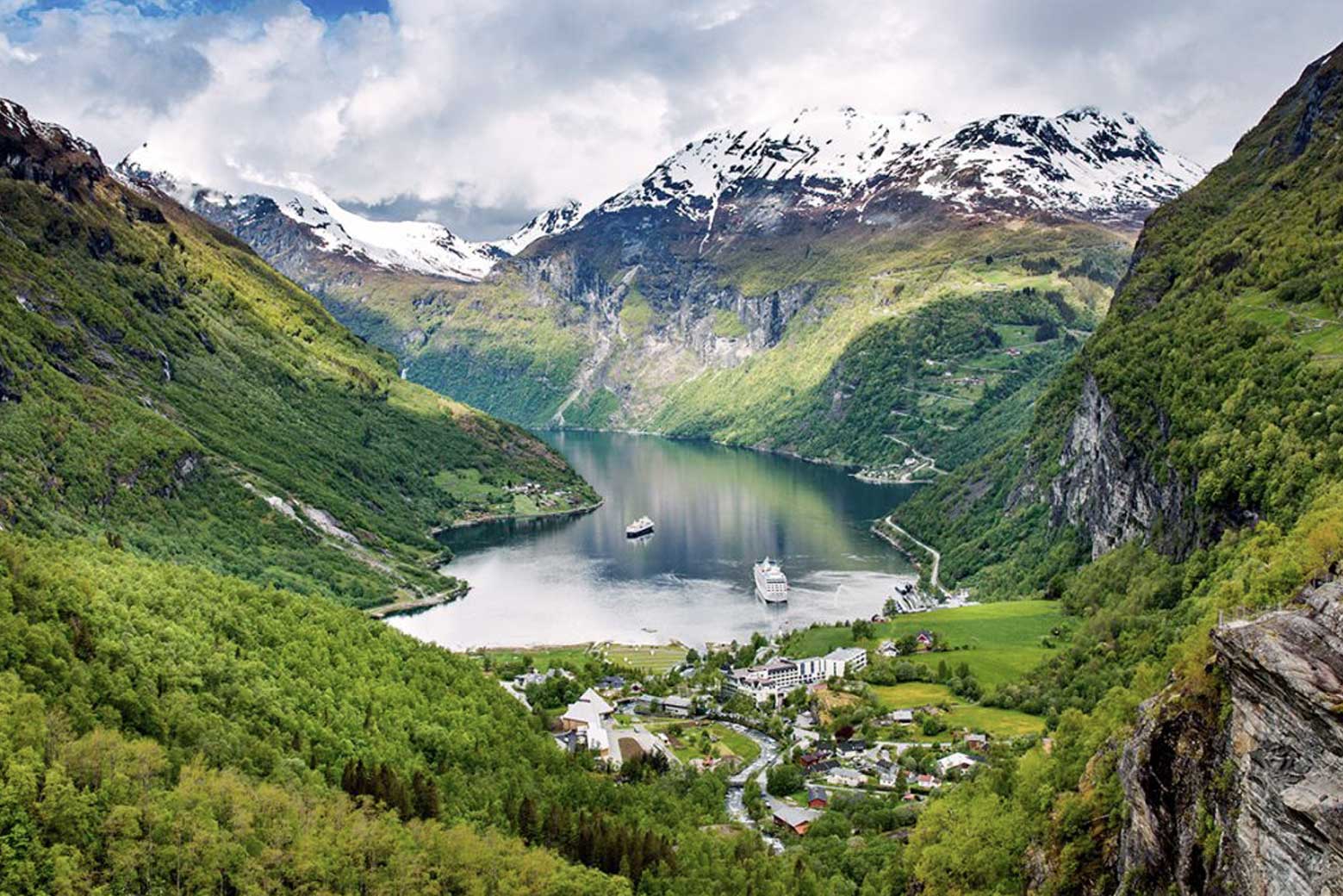